Episcopal collaboration between Africa and Europe

After the Congress organised by CCEE and SECAM (Symposium of Episcopal Conferences of Africa and Madagascar) held in Rome in 2012, the reflection on important pastoral issues for Africa and Europe continues with study seminars which involves about ten bishops from Europe and the African continent. 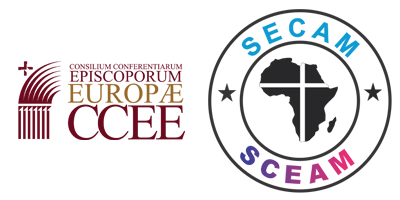 Hon. David Sassoli, President of the European Parliament, has died

The sympathy and prayers of H.E. Msgr Grušas, CCEE President

Meeting of the Legal Advisers for the European Bishops' Conferences

He was the CCEE General Secretary for 13 years

President Grušas' denunciation of the migrant crisis on the Belarussian-Polish border.

On 18 November 2021, the online preparatory meeting

The organisational phase resumes after the stop caused by Covid

President Grušas: Let us walk together

Concluding ceremony in the Basilica of St John Lateran

The Hon. Tajani: Europe must rediscover its soul

Europe must rediscover its Christian roots, the centrality of the person and the role of the family