At the online meeting, that was originally supposed to take place in Sarajevo from 21 to 23 April 2020 and postponed due to the coronavirus, was participated in by 37 Bishops and National Delegates. Ad aprire i lavori è stato H.E. Mons. Brendan Leahy, Head of the CCEE Interreligious Dialogue Section.

There were two presentations in the programme: first, “Religions at the Service of Fraternity in the World”, presented by H.Em. Card. Angel Miguel Guixot Ayuso, President of the Pontifical Council for Interreligious Dialogue. second, “Religious Education between the formal and the hidden curricula: ethnographic perspectives from Europe and the Middle East”, presented by Prof. Daniele Cantini, Martin Luther University in Halle (Germany).

A partire da un’analisi articolata della recente enciclica di Papa Francesco Fratelli tutti – read in relation to the Abu Dhabi document on Human fraternity, signed by Pope Francis together with Imam Al Tayyeb of Al Azhar – Card. Ayuso stressed that fraternity between men belonging to different religions, and non-believers alike, is the horizon to which interreligious dialogue in general and Islamic-Christian dialogue in particular tends. In this perspective, it becomes urgent on the one hand that in the public debate there should be room for reflection that proceeds from a religious background in relation to other contributions of a scientific and humanistic nature; on the other hand, there is an appeal to religions to make the most of their spiritual and moral resources in order to mature in mutual solidarity, whilst offering concrete evidence of this in contemporary societies. This implies the condemnation of all forms of violence, especially when carried out in the name of religion, in the knowledge that today our societies are often culturally marked by forgetting or abusing the name of God.

This last point recalls the centrality of religious education in order to build as deeply rooted and as widespread experiences of fraternity as possible.

Education – as Prof. Cantini highlighted in the second report– is of central importance not only for the content taught, but above all for the way in which it is interpreted and contextualised, also in relation to the various authorities from which it is proposed. Within this area in particular, the construction between open and dialoguing religious identities, or self-referential and mutually competitive, is at stake.

These are important lines of interpretation to proceed at a local level with experiences of interreligious dialogue that are conscious, profound, endowed with critical sense, nourished by the “music of the Gospel” that must resonate in Christian communities and where they operate among the people.

Attached is the text of Card. Angel Miguel Ayuso Guixot, President of the Pontifical Council for Interreligious Dialogue.

President Grušas: Let us walk together

Concluding ceremony in the Basilica of St John Lateran

Building a Europe based on dialogue, fraternity and social friendship

A summary of the second day's work

Mass at the Vatican presided over by Pope Francis

CCEE and COMECE Presidents speak at the Eucharistic Congress in Budapest

Meeting of the Eastern Catholic Bishops of Europe

CCEE, 50 years serving Europe, memory and perspectives in the context of Fratelli tutti

Season of Creation 2021 – A home for all? Renewing the Oikos of God 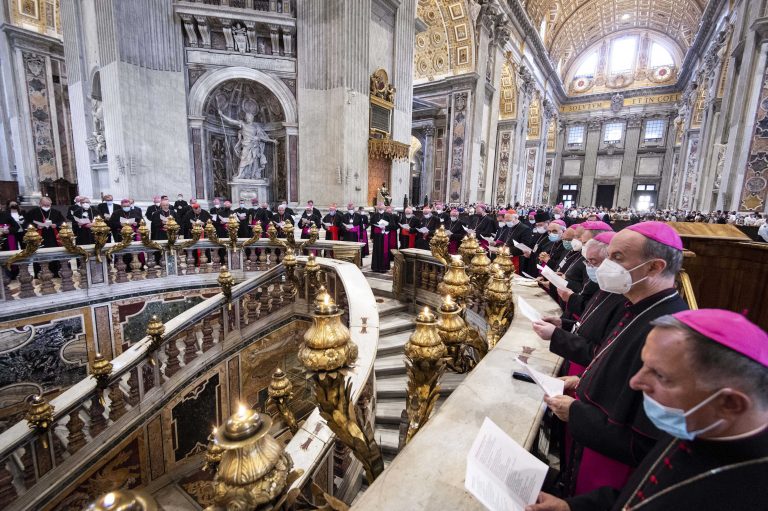